The basic purpose of finishing plastics is to remove the nominal imperfections such as scratches, dull spots, dents, protrusions, ridge marks at the junction of moulds, gate marks (entry points of pour). Many of these are avoidable by refined production methods. For finishing, primary techniques like grinding, filing, sanding, buffing, turning, tapping, sawing, etc. are used. Most post-production finishing processes are required for preparing or readying the item for subsequent manufacturing. These are, drilling, splitting, chopping, trimming, cutting, grinding, etc. Plastic products like granules, fibres, powders, liquids, etc. Go through several cycles of finishing and further manufacturing before a utilizable product is achieved. Some plastic entities need a micro size calibration to meet the tolerances’ requirements.


Rigid plastics, thermoplastics and thermosets can be machined by conventional processes such as drilling, sawing, turning on a lathe, sanding, and other operations. Glass-reinforced thermosets are machined into components like gears, pulleys, sprockets and other shapes, when the small batch size cannot justify fabrication of moulds. Various forms can be stamped out (die-cut) from sheets of plastics. The cups made by vacuum forming, for instance, are cut out of the mother sheet using a sharp die. In the case of a thermoplastic such as polystyrene, the scrap sheet left over, can be re-ground and re moulded. Soft thermoplastics need proper support to prevent distortion during machining. The elastic recovery in plastic materials with low softening point requires precautions so that shrinkage and distortions are prevented, such as with tapped holes that become tapered or smaller than the nominal requirements. Plastics show heat-build up during machining which causes gumming, discolouration, poor tolerance control.


These operations relate to speed, which in case of thermoplastic depends on the type of material, size and depth of the hole. Speeds that are normal for harder materials must be reduced for softer materials and larger size of apertures so as to minimize the heat generation. Thermoplastics require, slightly oversized hole to offset the shrinkage due to elastic recovery of material.


Reinforced thermosetting plastics and dense thermoset usually give clean saw-cut. Thermoplastic materials with low melting temperature become soft due heat of friction during cutting. Deep sawing becomes difficult as the saw gets jammed due to elastic recovery of side walls.


Plastic articles are decorated for technical, functional and sensorial purposes. Colour coats reduce the penetration of UV rays from sun light, whereas clear coats are used for toys and edible storage utilities. Colours are included by multi point injection moulding, or by mixing polymers with slightly a different melting point. Plastics are coloured by paints and organo-sol (liquid plastic formulation) through brushing, spotting, dipping and spraying. For texturizing and branding pad printing, hot-stamping, silk screen printing, are used. Screen printing is done for flat and round surfaces such as dials, bottles etc. Hot stamping and heat transfers involve transferring a pre prepared design from a soft flexible film or foil with heat and pressure. Other than this there are many types printing processes that transfer an image or patterns to specific areas of plastic objects. These include flexography, offset, etc. Valley printing deposits colour only in the depressions. Roller printing deposits colour on the level or ridge like surfaces. Toys and household articles are decorated by a variety of temporary and permanent stickers (labels) that are usually overprinted but in transparent stickers these are under printed. Preprinted designs on foil or film of a compatible material can be inserted in the mould before injection of thermoplastic material.


Plastic articles are hot and cold stamped by heated plates, rollers, etc. that are engraved or etched with designs, patterns, logos, etc. Rexine, wall papers have such patterns. Plastic surfaces are machine or laser engraved to create patterns or texture. Amorphous plastics such as Acrylics and poly-carbonates are engraved. Acrylic plastics are finished with flame polishing. Extruded plastics are provided with Corona treatment, referred to as air plasma, to modify the surface qualities.


Many plastics are sensitive to solvents so latex dispersion paints, NC clear and pigmented Lacquers, epoxies, etc. are applied. Plastics need to have electrically conductive surface which is imparted through plating and vacuum metallizing. It can be made to certain categories of plastics such as ABS, Polypropylene, Polyesters and some Nylons. Electroplating is done to achieve matt or glossy surfaces. Automobile accessories, tape, radio and TV trims have electroplating finish for providing metal like a look. Metals in very fine particulate size are deposited on plastics not only to provide metal like a look but also provide electrically a conductive surface. Vacuum metallizing involves spraying vaporised metal on a plastic article in a vacuum chamber (to prevent oxidation). Electrical parts, auto-spares, toys, artificial Jari threads, sun control films, etc. are, metallized in a variety of silvery, golden, copper or bronze effects using aluminium compounds. Gold, Silver Palladium, Platinum Coppers etc. are applied through a cathode (electrodes) sputtering. Metals are also spray deposited through suspensions. 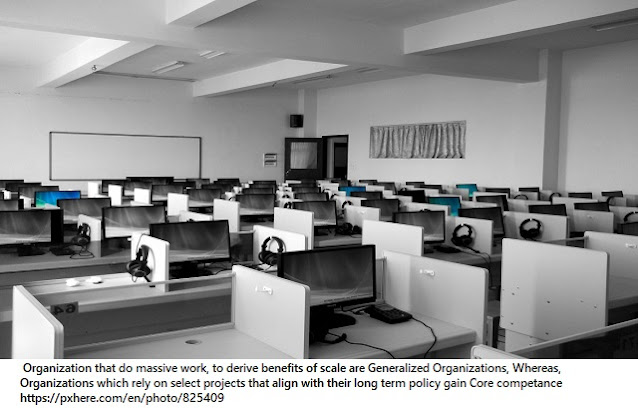 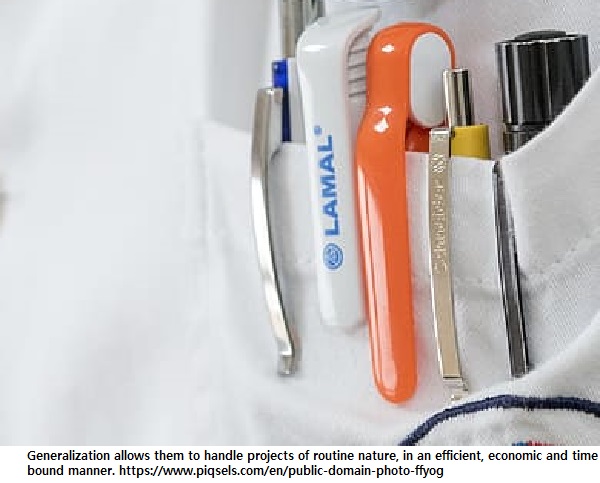 A person individually can have expertise or keen interest in a specific field. The person, however joins an existing organization to contribute the specific know-how, or such individuals come together to explore it. All organizations intend to work intensively in areas that are analogous to their aims. Organization, however, cannot operate just by intent or facilities. Organization needs opportunities to build up the core competence. 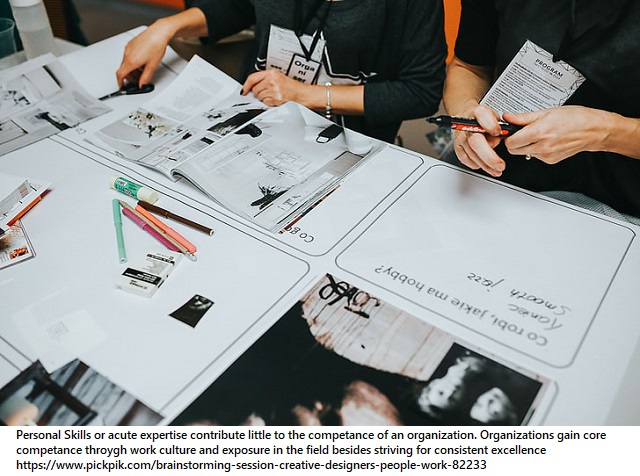 Core competence leads an organization into specific jobs, by way of excelling in results, efficiency of work procedure or job handling, efficiencies of input-benefit ratio, and client satisfaction. The repetition of opportunities leads to learning, experimentation and satisfaction. Core competence is perceived as an innovative pursuit that can cause enough synergies, to make the organization behave like self correcting or continuously adjusting biological entities. 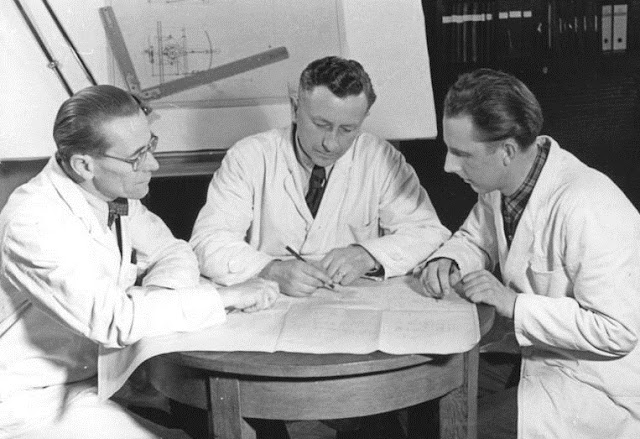 Core competence is also seen as Generalization versus Specialization. Some organizers believe that generalization, as a capacity to handle all types of projects and under whatever circumstances, is very essential for continuance. And if the need arises experts can be hired to meet the exigency. The generalization allows them to handle projects of routine nature, in an efficient, economic and time bound manner. Projects that are very large in scale, requiring little innovation, and of repetitive nature are handled by such organizations. Their service or fee’s charges are very competitive. 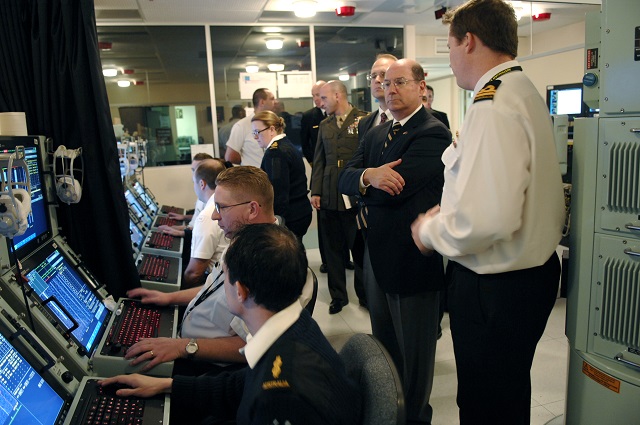 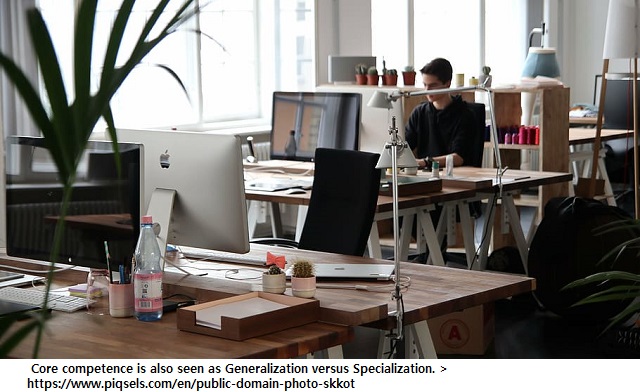 Specialization cannot be achieved by intent alone. One must grab projects that reinforce their skills, even by discounting the fees or profits. And, if opportunities in the desired field are few, one must strive for excellence in the smaller sections of the routine (or ‘bread-butter’ jobs). Specialization is equated with a single person in charge of organization, rather than group based practices. An Autocratic leader stimulates an organization towards an acute specialization, whereas a Bohemian leader dissipates the energy and de-focuses and strives for generalization. A Democratic leader will continuously review and revise, the aims of the organization, and plan the resources, to make the organization creative. 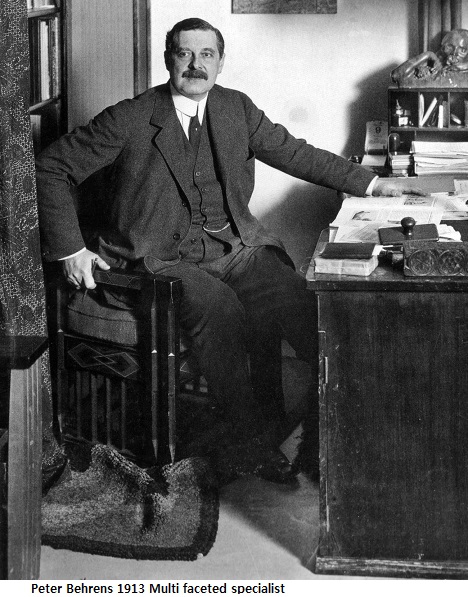 Creativity is not in specialization (capacity to excel in limited fields) nor in generalization (capacity to handle many different situations) in any field. Design creativity is seen in radical solution, proficiency in sustaining the technical superiority and learning. Design efficiency is perceived for being productive, cost efficacy and organizational ranking or super-ordination. 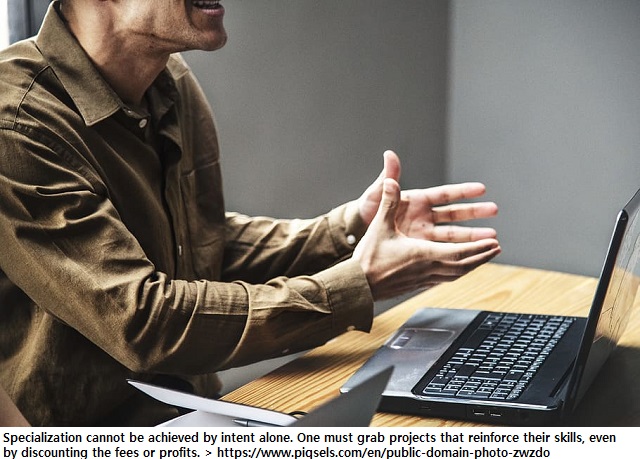 HUMAN BEHAVIOUR in SPACE
Course for Faculty of Design CEPT University Ahmedabad India > Jan 2015 offered by Gautam Shah
Human behaviour is evident in responses related to: Body, Environment, Space and the Occupants.
BODY: The human behaviour is seen through body-limb movements or postures, gestures, and as overt expressions in modes like speaking, writings, painting, etc as in expression and communication. . Physiological components of behaviour show up in survival, health, well being and comfort, spatial occupation with dimensional accommodation and fitments of the human-body, task functionality. Human behaviour sensed through Cognition, Psychological factors, Sensorial perception, Response mechanisms.
ENVIRONMENT: Environmental responses are of becoming aware of a space. These permeate into a space depending on the spatial characteristics, such as the size, shape, sequencing, quality of barriers, etc.
SPACE: Space is the setting where environment and cognition actualize concurrently. Nature of cognition is one major factor that governs the Space experience. Environment is continually variable and so a space experience is ever expounding. Some environmental conditions and spatial features often occur in concert. And so we expect the presence of one to trigger the other.
OCCUPANTS: Occupants for cultural reasons or social norms show varied behaviour. It is also affected by factors like age, sex, level of adaptation, familiarity, limb capacity, body-limb coordination, sensorial abilities and reach extension tools, etc. Behaviour (even of lone beings) is substantially in the context of ‘awareness’ of other human beings (and not necessarily the physical presence). Forms of interpersonal relationships of various races and cultures are different. The space, environment and the occupants together foster a social-contact mechanism. 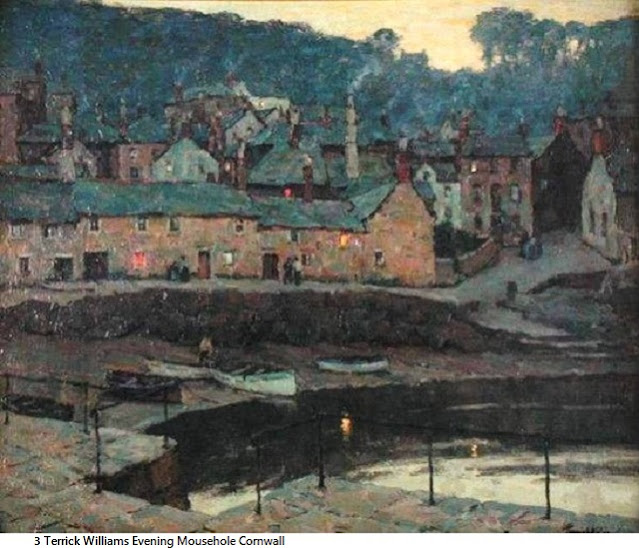