Doors have THREE categories of HARDWARE:


1 BASIC HARDWARE attaches a shutter directly or through a frame to an opening or doorway. (Basic-Hardware)


2 SECONDARY HARDWARE provides control on the movement of a door such as Latches, Stoppers, Locks-keys, stays.


3 APPENDAGES OR ATTACHMENTS that endow various types of functionality.


PADLOCK CHAINS: One of the simplest locking mechanisms is a chain. Chains are cast of brass, bronze or wrought iron and occasionally formed of braided metal wire or fibre ropes. The chains are primary locking devices with loops formed of round or oblong rings, a locking ring at one end, and a fixing hook at the other end. The locking ring is placed over or besides a similar locking ring at the threshold, lintels or on side stiles. A padlock is hung from the junction of locking rings. Similar systems are used for locking bicycles.

PARALLEL LOCKING RINGS: The door and the frame, or two adjoining shutters have hooked rings, which when brought together to a parallel plane or in adjoining horizontal position, allow a padlock to pass through. Often a ring and a chain with multiple loops are used.


LATCH: A latch is a mechanical fastener that holds a shutter against the frame or another shutter. A latch is functional through friction, a holding notch or a catch. Ball catch type of latch has a small sphere (ball-bearing) mounted on a coil spring. Strap latches have a retractable plastic or notch that is engaged in a slot.


ALDROP (HOLDROP): It is a latch in the form of a metal shaft with a closing handle resting over a cleat through which a padlock is set. The metal shaft, is round, square, flat or oblong in section. The shaft slides through cleats or a set of three ring brackets but its end enters into the jamb to fasten the shutter door.

BOLT OR NIGHT LATCH (TADI): Bolt is a straight sliding shaft with two / three cleats. The shaft has no closing handle (as in aldrop) but instead a notch or a small projecting holder is provided. Some latch shafts have a small aperture in the shaft to insert a padlock to prevent its sliding movement.

LATCH-BOLT: A bolt has an angled (chamfered) surface which acts as a ramp to push the bolt in while the door is being closed. With a latch-bolt, a door can be closed without having to operate the handle. A handle, however, is required to pull back the latch-bolt for opening the shutter.

DEADBOLT: Deadbolts usually extend deeper into the frame and are not retractable from outside except with a key. From inside the deadbolt can be retracted by either a latch or key. The bolt is often not angle cut or chamfered, so that no one from outside can open the bolt with stiff card like credit card. Deadbolts are fixed as add-on system over the inside face of the door. Such fixing can be undone with a hard kick over the shutter or use a crowbar to break-in. For security purposes deadbolts are often concealed within the shutter body to prevent forceful breaking in. Deadbolts also have additional safety chain, which allows a door to be opened a little to receive a postal-currier delivery or talk to a visitor.


FLUSH BOLT: It is a sliding bolt housed in channel or pipe with projecting a holder pin mounted on a surface or concealed by mortising into the edge of a door or astragal that typically engages into the jamb head and sill to secure the door.


HASP: A hasp or Chapras in India, is a thin narrow plate hinged to a fixing flange. The plate, at its end has an elongated aperture which sits over a padlock placing ring. Hasps are used in small furniture items such as jewellery boxes, wall clocks, drawers, and interior doors.


SLAM LATCH: It uses a spring and is activated by the shutting or slamming of a door. Like all latches, a slam latch is a mechanism to hold a door closed. Slam latch derives its name from its ability to slam the doors and drawers shut without damaging the latch. A slam latch is rugged and ideal for industrial, agricultural and construction applications.


THUMB LATCH, NORFOLK LATCH OR SUFFOLK LATCH: These are stoppers used in vertical or horizontal position. The shaft is moved by thumb. These are often very thin, so can be fixed on the side of a stile of the first of two door systems, on sliding doors, etc.


DOOR STAYS are mechanisms to keep a door shut or stay it in a particular open position. Normally stays are used to keep a shutter closing down, and so used on the internal (opening) face of the shutter, whereas latches and such mechanisms are used for preventing the opening of the shutter. Some stay mechanism is required to restrict movement of a pivoted door in one direction. Stays can be placed at the bottom, midway or at the top of the shutter. Other staying mechanisms are: stoppers, door restrictor door-stops, door catch, door closer and friction stays.


WEDGE STAY: A wedge is one of the oldest stay systems. It is made from wood, metal or stone. Wedges function due to friction from the floor surface.


WINGED STAYS: These are hinged flaps that can be opened out over the side of the stile of the shutter to prevent the door closing. These are fixed at handle height and so comfortable to operate.


PRESSURE STAYS work with vacuum or suction created in a hollowed rubber rim. These are at floor level and so foot operated. Some stays when not used have an extra mechanism that turns to the closing edge of the door to keep it slightly ajar. These makes, it safer for children and old persons hurting their knuckles.


DOOR HOLDERS: These are fixed at the back of the door (where a wall or such striking face is available). The door side attachment is held by vacuum, magnet or mechanical snapping.
SHUTTER HOLDERS or PREVENTORS: These are essentially restrictive arrangements that prevent a shutter from opening to full width. These are used for hinged, pivoted and sliding doors to regulate the entry or exit. The mechanisms include stretchable ropes, chains or armed levers. Automatic doors have sensors that judge the width of the passage required and regulate the opening width.

Read about at> Locks 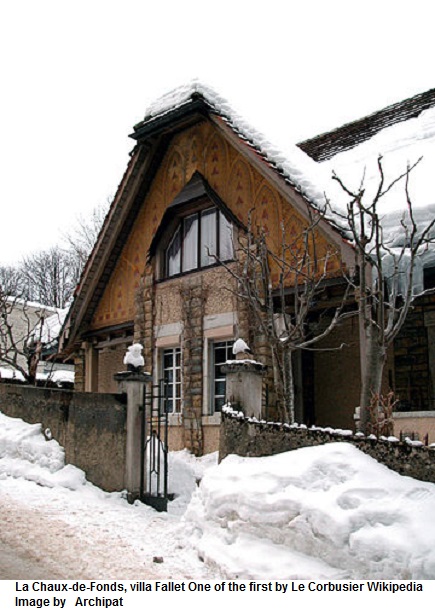 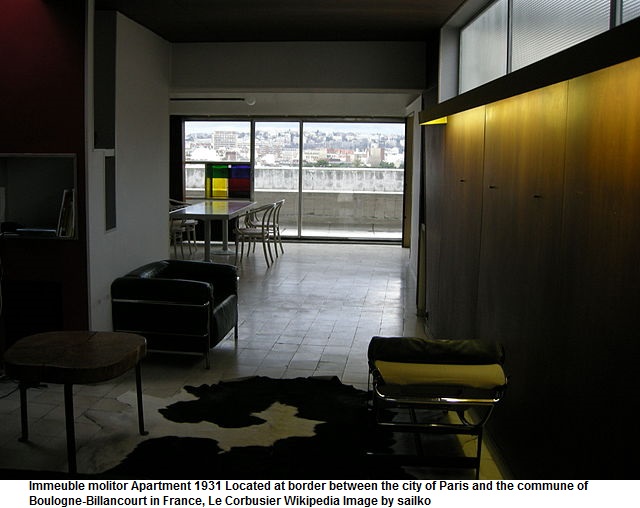 For Corbusier history of a window was a struggle for illumination. He typically wanted, at least in the initial years, openings to bring outside in. This was due to childhood memories of Northern Europe day lighting, inferior quality of glazing and interior spaces that had small windows and required artificial illumination often during the day time. He, as a cubist saw the glazing plane as an opaque surface slightly receding due to its placement and surface quality. Glass was a shimmering plane against the dull surface of the structure. He liked the configuration for illumination to be unbroken, and so preferred a separate ventilation system. For the same reason he did not like framing for the window. He would rather place the glazing plane directly into the masonry. This was continued in many of the later buildings like Ronchamp and Shodhan Villa Ahmedabad. 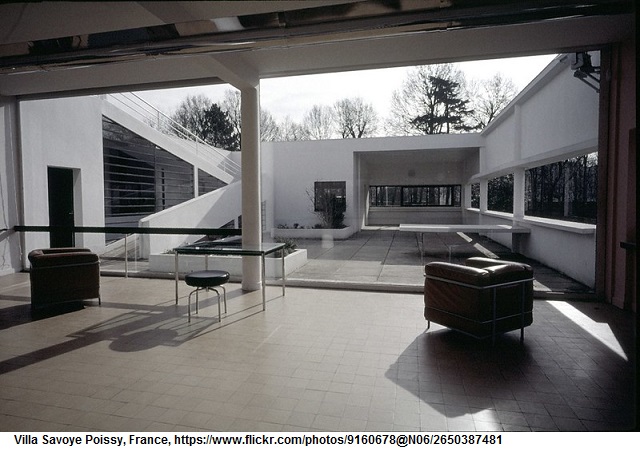 Corbusier started placing more then adequate openings, like the ribbon windows of Villa Savoy, and invited complaints from the client. The extent openings became more rational in later projects. To cut the excessive glare he began to use an architectural baffle, a brise-soleil, for the first time, in the Algerian offices blocks (1933). Later he experimented with mechanical baffles for an office building in Rio de Janeiro, Brazil, but mainly used masonry and cement concrete brise soleil for buildings at Chandigarh and Ahmedabad. 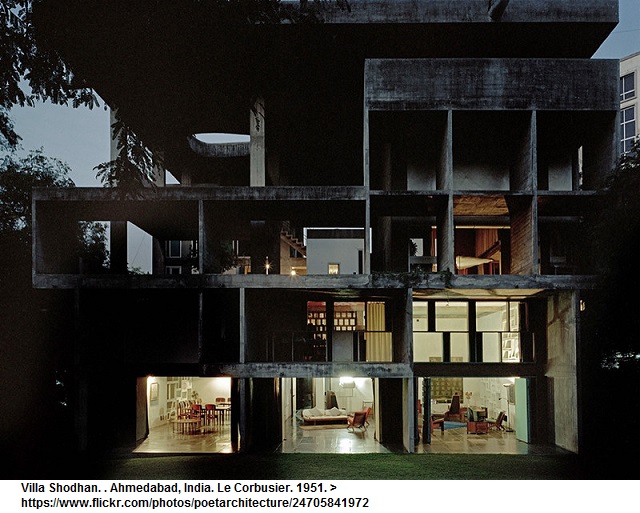 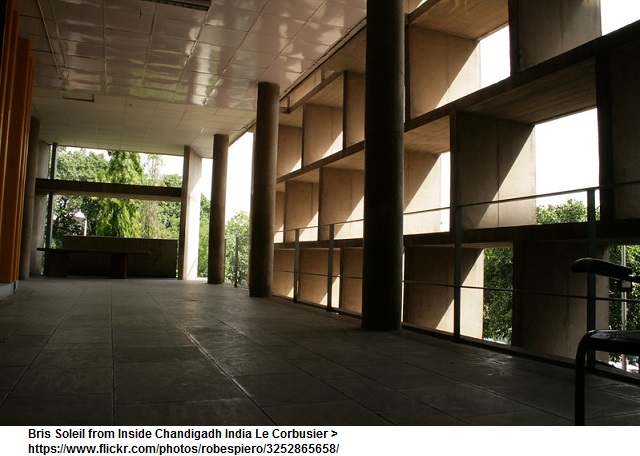 For him daylight was a living light was continuously variable, whereas the artificial light was static and local. Corbusier experimented with the distribution of daylight by positioning an interior plane adjacent to the window. The planes were first in the form of a right angle wall or ceiling, but later became inclined as well as doubly curved. Slit windows close to flat ceilings were used in many buildings. He began to use the same technique for distributing illumination of electric lights by large parabolic reflectors. 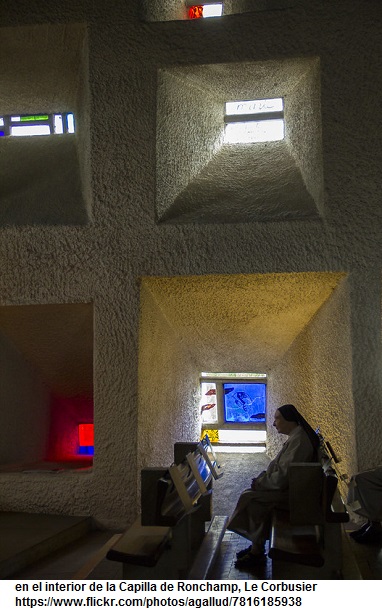 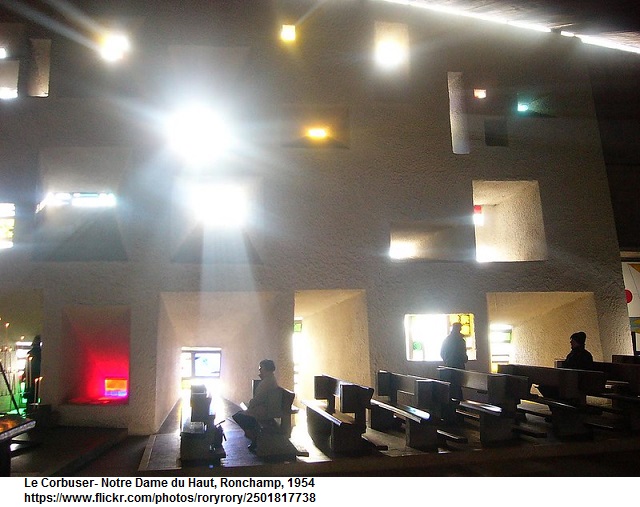 Corbusier placed openings to frame specific land views as picture windows or often just apertures. Ends of the ramps, stairs, passages, were marked by such openings. Such linking of openings was also used with apertures or cutout in ceilings. These occurred with another smaller or larger cut out below or with a water body to reflect it. 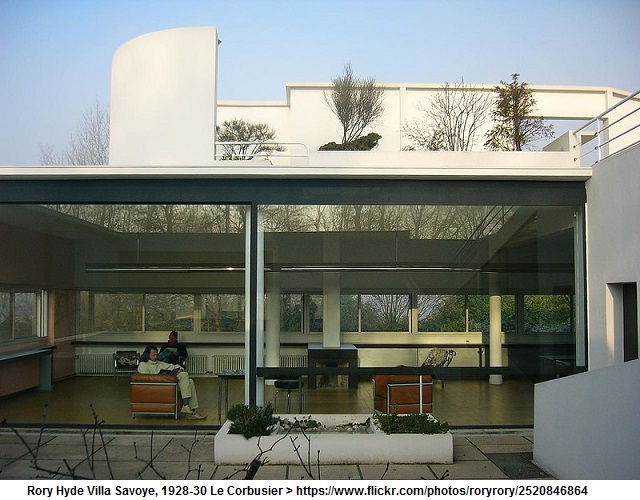 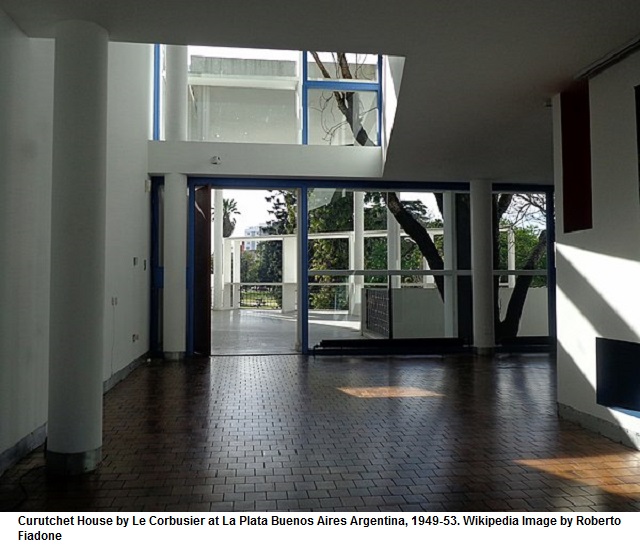